For any clinical trial, the study protocol is the blueprint of how the clinical trial should be conducted. Clinical study protocols must be conducted according to the International Council for Harmonization (ICH) guidance on good clinical practice (GCP), which, among other things, helps safeguard the rights, safety, and well-being of study participants. If conducted as designed, the associated data should be reliable and reproducible and support clear interpretation of the results, while maintaining the participants’ protection. In light of this, one might reasonably assume that deviations from this protocol could be harmful to the participant or the accuracy of the data and should therefore be avoided.

"A protocol deviation is any change, divergence, or departure from the study design or procedures defined in the protocol.

"To avoid confusion over terminology, sponsors are encouraged to replace the phrase “protocol violation” in Annex IVa with “protocol deviation”,

There is considerable variability regarding the interpretation, and classification of what an important protocol deviation is, which creates challenges in the identification, collection, and reporting of deviations - resulting in over-reporting PDs that could potentially delay the identification of important patient safety information by increasing the noise in the system or under-reporting PDs that could influence the reliability of the study results and patient safety signals.

In order to reduce the variability in what, when, how the PDs should be collected, it might be helpful to take a look at how the data about the PDs are analyzed and used.

The protocol deviation data will then be used in the following aspects:

For the clinical study report (CSR):

All important deviations related to study inclusion or exclusion criteria, conduct of the trial, patient managements or patient assessment should be described.

In the body of the text, protocol deviations should be appropriately summarized by center and grouped into different categories, such as:

In Appendix 16.2.2, individual patients with these protocol deviations should be listed, broken down by center for multicenter studies.

For FDA BIMO of NDA/BLA submission under Center for Drug Evaluation and Research (CDER):

The FDA Office of Scientific Investigations (OSI) requests that the by-site data and listing are provided for Bioresearch Monitoring (BIMO). The by-site data is used by OSI to select the investigational sites for inspections for CDER submissions.

The FDA Office of Scientific Investigations (OSI) requests that the items described in the draft guidance for industry Standardized Format for Electronic Submission of NDA and BLA Content for the Planning of Bioresearch Monitoring (BIMO) Inspections for CDER Submissions (February 2018) and the associated Bioresearch Monitoring Technical Conformance Guide Containing Technical Specifications be provided to facilitate development of clinical investigator and sponsor/monitor/CRO inspection assignments, and the background packages that are sent with those assignments to the FDA ORA investigators who conduct those inspections. This information is requested for all major
trials used to support safety and efficacy in the application (i.e., phase 2/3 pivotal trials).

"Total number of important protocol deviations at a given site by treatment arm for subjects in the SAFPOP. A protocol deviation is any change, divergence, or departure from the study design or procedures defined in the protocol or associated investigational plans that is not implemented or intended as a systematic change. This value should include multiple deviations per subject and all major deviation types. Important deviations are those deviations that might significantly affect the completeness, accuracy, and/or reliability of the study data or that might significantly affect a subject's rights, safety, or well-being"

This section should include comments on compliance with good clinical practices, including informed consent, protocol violations, site-specific issues, and whether the clinical trials were conducted in accordance with acceptable ethical standards.

If a DSI audit process and report is not requested, provide a brief summary on the quality and nature of other methods used to audit or check the applicant’s data and/or analyses.

For DSI-requested audits, include a brief summary of the rationale for DSI audits and site selection such as:

• A specific concern for scientific misconduct at one or more particular sites based on review of financial disclosures, protocol violations, clinical trial discontinuations, or safety and efficacy results

For defining the per-protocol population for Sensitivity or Supplemental Analyses

Efficacy analyses are usually performed in full analysis set or intention-to-treat population. However, to test the robustness of the statistical results and to assess the impact of the protocol deviations on the statistical results, additional sensitivity or supplemental analyses are usually performed on the per-protocol population.

Per protocol set (valid cases, efficacy sample, evaluable subjects sample): The set of data generated by the subset of subjects who complied with the protocol sufficiently to ensure that these data would be likely to exhibit the effects of treatment according to the underlying scientific model. Compliance covers such considerations as exposure to treatment, availability of measurements, and absence of major protocol violations. 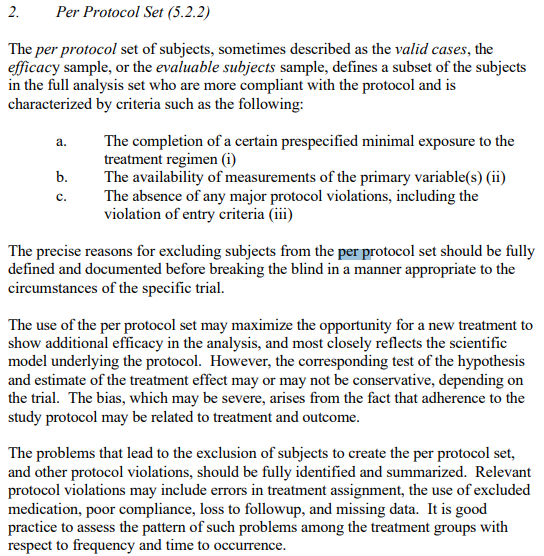 ICH E9 Addendum also discussed the per-protocol set (PPS) and analyses based on PPS are included as supplemental analysis:

Section 5.2.3. indicates that it is usually appropriate to plan for analyses based on both the FAS and the Per Protocol Set (PPS) so that differences between them can be the subject of explicit discussion and interpretation. 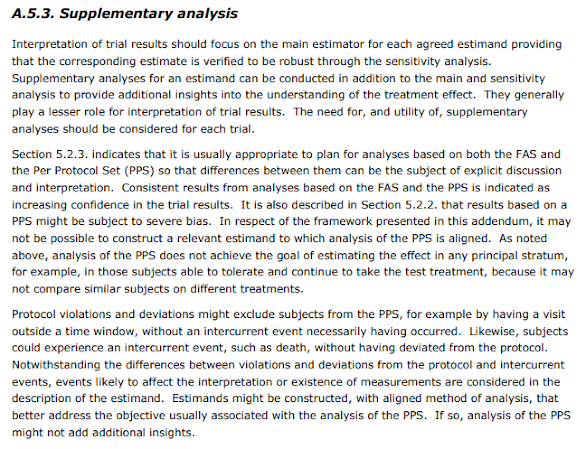 Very informative article. The study protocol for any clinical trial is the blueprint for how the experiment should be carried out. Clinical research protocols must follow the International Council for Harmonization (ICH) advice on good clinical practise (GCP), which helps protect study participants' rights, safety, and well-being, among other things. If everything goes according to plan, the accompanying data should be trustworthy and repeatable, allowing for straightforward interpretation of the results while still protecting the participants.