A biomarker is a biologic molecule, such as a protein or gene, that is measureable in tissue, blood, or other body fluids, and is an indicator of some clinically significant condition. Biomarkers can be diagnostic, surrogate, prognostic, or predictive. Biomarkers can be very useful in clinical trials. They can be used as the inclusion criteria to identify the right patient population for the clinical study. They can be used as the efficacy endpoint (specifically the predictive biomarkers).

Prognostic biomarkers indicate how a disease may develop in an individual case regardless of the type of treatment and show the progression of disease with or without treatment. In other words, prognostic biomarkers refer to markers that correlate with the natural progression or aggressiveness of a disease. In oncology, prognostic biomarkers are useful for informing patients about the risk of recurrence or median survival for their particular type of malignancy and for minimizing confounding factors when analyzing clinical trial cohorts or when prospectively stratifying patients in randomized clinical trials.

Medscape has an article by Tezak, Kondratovich, and Mansfield "US FDA and Personalized Medicine: In vitro Diagnostic Regulatory Perspective". The article included the following diagram to distinguish the differences between prognostic biomarkers and predictive biomarkers. 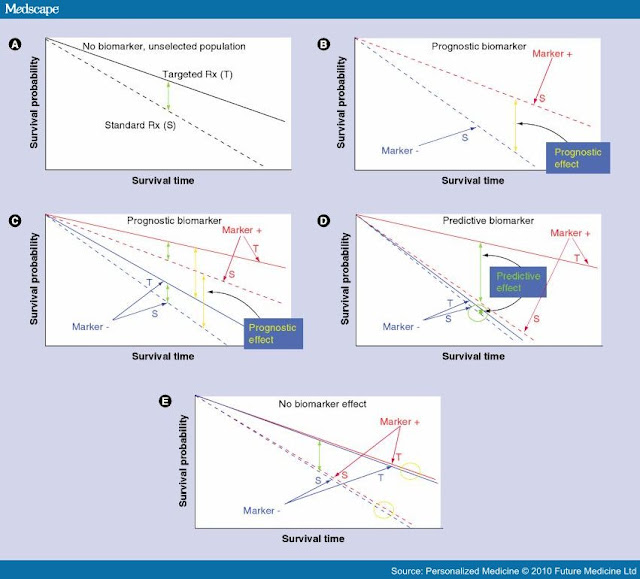 One of the slides from Roche is also a good summary for the differences among three type of biomarkers. 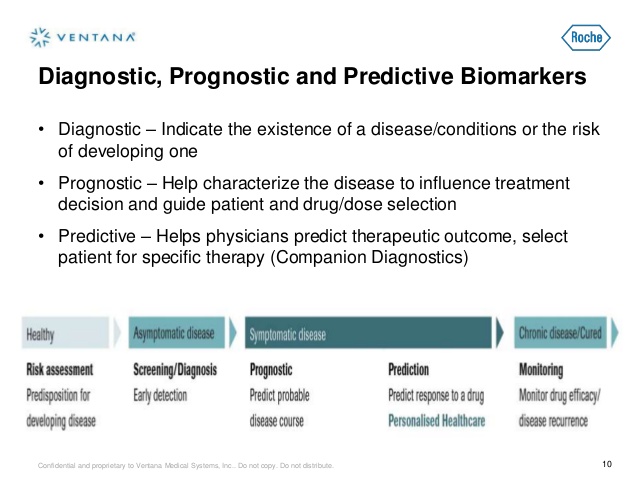 In Vertex’s briefing book for FDA advisory committee meeting on May 12, 2015, the rationale of using the average of two visits was indicated as below:

The average treatment effects at Weeks 16 and 24 was obtained from the mixed model with repeated measures (MMRM). It would be naïve if one thinks that the average value of week 16 and week 24 is calculated for each individual subject. According to FDA’s statistical review, the statistical methods were described as below:


For the primary efficacy endpoint, absolute change from baseline in ppFEV1 at Week 24, the primary analysis was to test the difference between each active combination treatment group versus placebo using a mixed model with repeated measures (MMRM). Both on-treatment measurements and measurements after treatment discontinuation (for subjects who discontinued dosing early) were included in primary analyses. The MMRM analysis included subject as a random effect, treatment, visit, and treatment-by-visit interaction as fixed effects, with adjustment for sex, age group at baseline, and ppFEV1 severity at screening. An unstructured covariance structure was assumed to model the within-subject errors. A Kenward-Roger approximation was used for the denominator degrees of freedom. The primary result obtained from the model was the average of the treatment effects at Week 16 and at Week 24.

The summary results were depicted at the following graph. 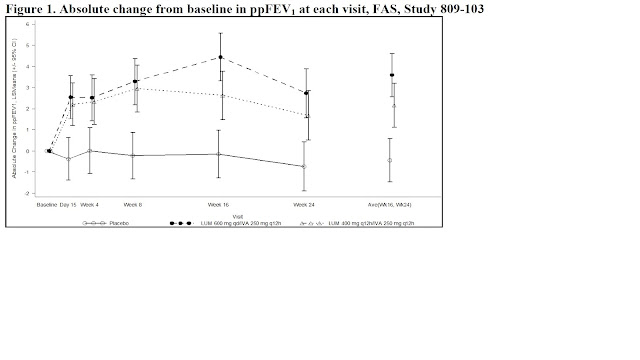