Pragmatic trials or large simple trials are becoming a hot topic discussed in recent scientific meetings. These are not really new clinical trial designs, but the trials conducted more close to the real world. The concept of pragmatic trials is not new. I saw an article in British Medical Journal dated back to 1998 “Understanding controlled trials: What are pragmatic trials?” where it said “Trials of healthcare interventions are often described as either explanatory or pragmatic. Explanatory trials generally measure efficacy-the benefit a treatment produces under ideal conditions, often using carefully defined subjects in a research clinic. Pragmatic trials measure effectiveness-the benefit the treatment produces in routine clinical practice.”

FDA commissioner, Dr Califf, has long been a proponent of the pragmatic trials. In his speech at 8th Annual Conference on Statistical Issues in Clinical Trials, he called the traditional clinical trials as Mechanistic trials with intention to evaluate a biological or mechanistic hypothesis and Pragmatic trials are those with Intention to inform decision makers about health and healthcare.

The practical adaptation of pragmatic clinical trials is:
(1) an intent to inform decision-makers (patients,         clinicians, administrators, and policymakers), as opposed to elucidating a biological or social mechanism;
(2) an intent to enroll a population relevant to the decision in practice and representative of the patients/populations and clinical settings for whom the decision is relevant; and
(3) either an intent to
–        (a) streamline procedures and data collection so that the trial can focus on adequate power for informing the clinical and policy decisions targeted by the trial
–        (b) measure a broad range of outcomesPragmatic clinical trials fit for the purpose of informing decision-makers regarding the comparative balance of benefit and risk of a biomedical or behavioral health intervention at the individual or population level 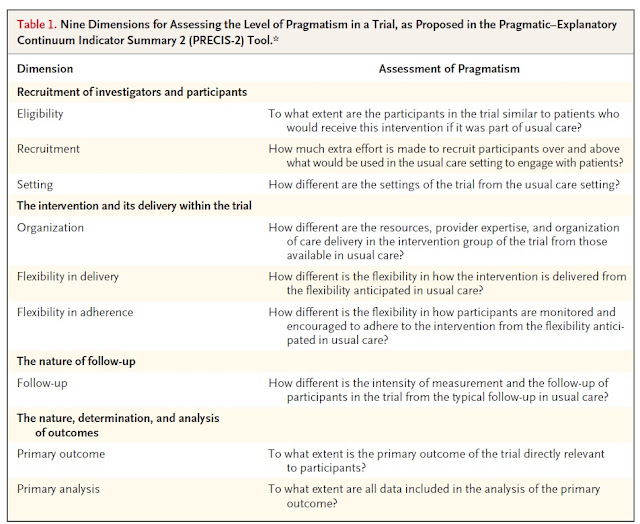 Here are some useful information for pragmatic clinical trials.

Clinical trials have been the main tool used by the health sciences community to test and evaluate interventions. Trials can fall into two broad categories: pragmatic and explanatory. Pragmatic trials are designed to evaluate the effectiveness of interventions in real-life routine practice conditions, whereas explanatory trials aim to test whether an intervention works under optimal situations. Pragmatic trials produce results that can be generalized and applied in routine practice settings. Since most results from exploratory trials fail to be broadly generalizable, the “pragmatic design” has gained momentum.

Here is a table I would compare the explanatory trials and the pragmatic trials:


The pragmatic trials and the precision medicine seem to be two trends in the clinical trial fields. While the pragmatic trials encourage the large simple trial to mimic the real world situation, the precision medicine encourage the clinical trials with smaller and targeted population, enrichment design, and homogeneous population.
Posted by Web blog from Dr. Deng at 12:23 AM 2 comments:

Anybody who learns the statistics will be familiar with the concept of type I and type II error. In hypothesis testing, Type I error, also known as a “false positive”: the error of rejecting a null hypothesis when it is actually true. In other words, this is the error of accepting an alternative hypothesis (the real hypothesis of interest) when the results can be attributed to chance. Plainly speaking, it occurs when we are observing a difference when in truth there is none (or more specifically - no statistically significant difference). 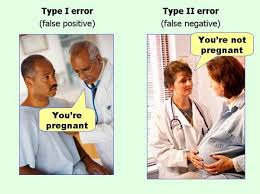 Now, there are also a concept of type III error. Fundamentally, Type III errors occur when researchers provide the right answer to the wrong question. While the term ‘type III error’ has been used in literature and presentations, the true meaning of ‘type III error’ is not clearly or consistently defined. People may use the term “type III error” to refer to different things.

In one of presentations, the type III error was used to describe those clinical trials that would have been successful but were not performed due to resource constraint

Type III error referring to an error by rejecting a null hypothesis but inferring the incorrect alternative hypothesis.

A type III error is where you correctly reject the null hypothesis, but it’s rejected for the wrong reason. This compares to a Type I error (incorrectly rejecting the null hypothesis) and a Type II error (not rejecting the null when you should). Type III errors are not considered serious, as they do mean you arrive at the correct decision. They usually happen because of random chance and are a rare occurrence. You can also think of a Type III error as giving the right answer (i.e. correctly rejecting the null) to the wrong question. Either way, you’re still arriving at the correct conclusion for the wrong reason. When we say the “wrong question”, that normally means you’ve formulated your hypotheses incorrectly. In other words, both your null and alternate hypotheses may be poorly worded or completely incorrect.

In a presentation slides titled “Type III and Type IV Errors: Statistical Decision-Making Considerations in addition to Rejecting and Retaining the Null Hypothesis”, type III error was used to refer to the wrong model, right answer and common influences on type III error would be:

In an editorial article of Arch Surg, the type III error was described as “the type III error occurs whenever the conclusions drawn are not supported by the data presented”. The author presented 5 examples using the published articles.

Solving the wrong problem is defined as a Type III error by Howard Raiffa (1968, p. 264) and Ian Mitroff (1974). Type III errors are different from Type I and Type II errors, which involve setting the significance level too high or too low in testing the null hypothesis.

in an article by Twardowski and Misra (2013) Con: Randomized controlled trials (RCT) have failed in the study of dialysis methods:

“The second trial (the HEMO study) committed a Type III statistical error asking the wrong question and did not bring any valuable results, but at least it did not lead to deterioration of dialysis outcomes in the USA”

Kimball [7] postulated a Type III error, an error that gives the right answer to the wrong problem. A Type IV error was subsequently postulated as a type of error that solved the right problem too late [8].

Flick (2006), for example, discusses qualitative validity in terms of “whether researchers see what they think they see” (p. 371). Moreover, he and others (Kirk & Miller, 1986) argue that three types of error may occur as regards qualitative validity: seeing a relationship, a principle, and so on when they are not correct (Type I error); to reject them when they are correct (Type II error); and asking the wrong questions (Type III error).

Green and Tones (1999) “For debate: Towards a secure evidence base for health promotion”,

Discussion so far has essentially been concerned with assessing the outcome of interventions and has ignored the nature of the intervention itself. Type III error refers to rejection of the effectiveness of a programme when the programme was inadequate in terms of design or delivery. This is neatly encapsulated in the acronym GIGO – garbage in, garbage out!

The real worry clinically is the type III error, in which a clinically significantly inferior treatment is preferred to a superior one on the basis of insufficient dataTraditional Type I and II error describe the false positive and negative rates, Type III error describes the opportunity cost of not investigating valid hypotheses due to budgetary limitations

Predictor variables must be easy to collect (to minimize missing data), clinically relevant, and reliable.The number of variables in multiple regression analyses must also be carefully controlled. Too few variables means that important predictors may be omitted, while too many variables can result in overfitting (a type I error in which false-positive predictors are erroneously included in the model); underfitting (a type II error in which important variables are omitted from the final model); and paradoxical fitting (a type III error in which a variable that, in truth, has a positive association with the outcome is found to have a negative association).The risk of these problems increases as the ratio of outcome events to the number of predictor variables becomes smaller (the events per variable [EPV] ratio, in which the number of events is the lower figure for binary outcomes). The risk of error is especially high with EPVs <10 .="" span="">

In an article by Robin et al (1990) “Type 3 and type 4 errors in the statistical evaluation of clinical trials”, the type III error was referred to

“Type 3 errors, then, are errors in which the risks of a given medical or public health approach is underestimated, undetected or not specifically sought, leading to an underestimate of the risk-benefit balance.”. The type 3 error was further classified as three categories: type 3A errors arise from a failure to obtain sufficient data to determine the statistical significance of a given risk in an experimental versus a control group.  Type 3-B errors involve failures to look for or detect specific risks in an experimental versus a control group. Type 3-C errors involve risks in which the harm to subjects occurs months to years after the initial use of the modality As a result, the risk-benefit ratio of the modality is seriously underestimated.