For non-inferiority clinical trials, the key issue is to pre-specify the non-inferiority margin and the non-inferiority margin has to be based on the historical supporting data from the studies that compare the active control group with Placebo. If there are multiple historical studies comparing the active control group with Placebo, meta analysis will need to be performed. From the meta analysis, the point estimate and the 95% confidence interval will be obtained.

As indicated in FDA’s guidance "Non-Inferiority Clinical Trials", there are essentially two approaches to derive the non-inferiority margin:

“Having established a reasonable assumption for the control agent’s effect in the NI study,  there are essentially two different approaches to analysis of the NI study, one called the fixed  margin method (or the two confidence interval method) and the other called the synthesis method. Both approaches are discussed in later sections of section IV and use the same data  from the historical studies and NI study, but in different ways.”

The guidance further explained the fixed margin method as:

“in the fixed margin method, the margin M1 is based upon estimates of the effect of the active comparator in previously conducted studies, making any needed adjustments for changes in trial circumstances. The NI margin is then pre-specified and it is usually chosen as a margin smaller than M1 (i.e., M2), because it is usually felt that for an important endpoint a reasonable fraction of the effect of the control should be preserved. The NI study is successful if the results of the NI study rule out inferiority of the test drug to the control by the NI margin or more. It is referred to as a fixed margin analysis because the past studies comparing the drug with placebo are used to derive a single fixed value for M1, even though this value is based on results of placebo-controlled trials (one or multiple trials versus placebo) that have a point estimate and confidence interval for the comparison with placebo. The value typically chosen is the lower bound of the 95% CI (although this is potentially flexible) of a placebo-controlled trial or meta-analysis of trials. This value becomes the margin M1, after any adjustments needed for concerns about constancy. The fixed margin M1, or M2 if that is chosen as the NI margin, is then used as the value to be excluded for C-T in the NI study by ensuring that the upper bound of the 95% CI for C-T is < M1 (or M2). This 95% lower bound is, in one sense, a conservative estimate of the effect size shown in the historical experience. It is recognized, however, that although we use it as a “fixed” value, it is in fact a random variable, which cannot invariably be assumed to represent the active control effect in the NI study.”

“Thrombolytic therapy, mostly administered up to six hours after ischaemic stroke, significantly reduced the proportion of patients who were dead or dependent (modified Rankin 3 to 6) at three to six months after stroke (odds ratio (OR) 0.81, 95% confidence interval (CI) 0.72 to 0.90).” 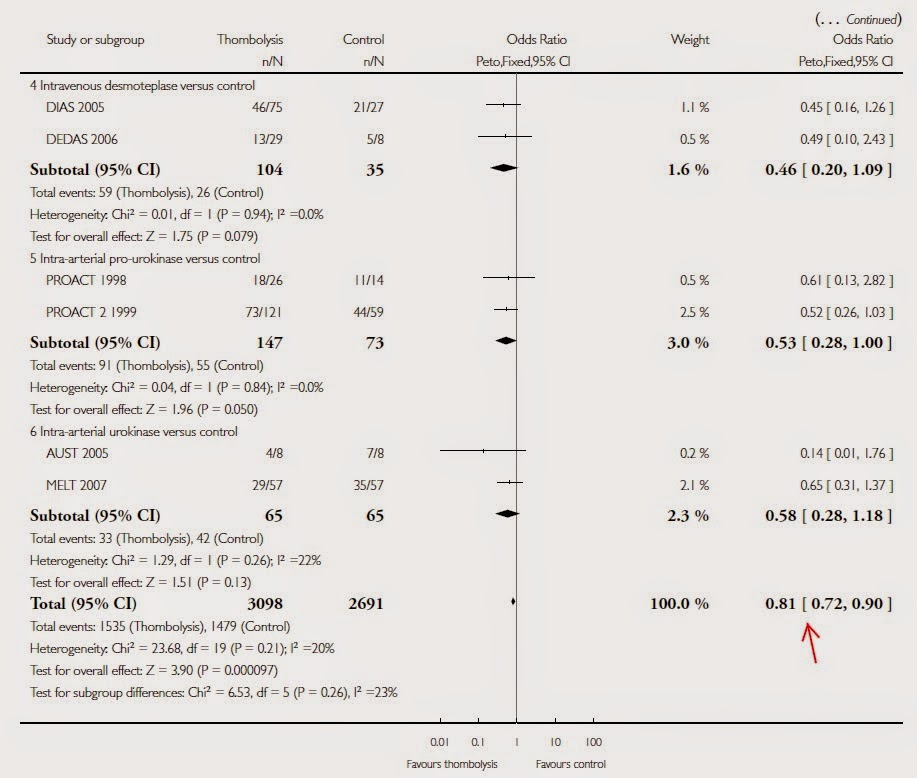 1-0.90 = 0.10 is the treatment effect of Existing Thrombolysis Agent in reduction in patients with unfavorable outcome

The non-inferiority margin would be 1.06.

1. Depending on the outcome being good or bad, either the lower bound or upper bound of 95% confidence interval of the Active Control versus Placebo should be used when deriving the non-inferiority margin