While the randomized, control clinical trial has become and remains to be the golden standard in drug development, we also see the increased use of non-randomized, single-arm study where the effectiveness of the testing drug is compared to the historical control.

When a pivotal study is a single arm and has no concurrent control, the results from the study will need to be compared to the historical control or a common standard that has been accepted by the medical community or regulatory agencies. This seems to be more common in the oncology area and in rare disease areas.

Without any specific statistics, I can only say this is my impression that the historical control seems to be more accepted by the US FDA in its approvals in oncology and rare disease areas. Here are three examples of recent drug approvals based on historical control:

The pivotal study is a single-arm study without concurrent control and the primary efficacy endpoint is objective response rate (ORR). The result is compared with the historical / standard rate of 40%.

The original study was a randomized, double-blind, placebo control study with three arms (eteplirsen 30 mg/kg weekly; eteplirsen 50 mg/kg weekly, and placebo) – 4 subjects in each arm for a total 12 subjects. All subjects including placebo subjects were rolled over to an open-label extension study for long-term assessment.

The results from double-blind portion of the study did not provide the strong evidence for efficacy. The sponsor conducted a post-hoc comparison with a historical control.

FDA was not convinced with eteplirsen’s efficacy and conducted the advisory committee. In the end, the eteplirsen was approved as the first treatment in Duchenne Muscular Dystrophy with a lot of controversies. The comparison with historical control (while hotly debated) was a big part of the evidence contributing to the approval.


The use of historical control is not new. It was stated in the ICH guideline E10 “CHOICE OF CONTROL GROUP AND RELATED ISSUES IN CLINICAL TRIALS”

In FDA's statistical review of eteplirsen in DMD, the following comments were made on the use of historical control:

Historical Control Cohort
The comparison of eteplirsen with historical controls was not part of an adequate and wellcontrolled study. The applicant obtained historical data after observations were made for the eteplirsen patients. Historical data were obtained from 2 DMD patient registries (Italian DMD Registry and the Leuven Neuromuscular Reference Center – NMRC) for comparison to eteplirsen-treated patients
……
According to the ICH E10 guidance on Control Group and Related Issues in Clinical Trials, the major and well-recognized limitation of externally controlled (including historical control) trials is inability to control bias. The best group and control group can be dissimilar with respect to a wide range of observable and unobservable factors that could affect outcome. It may be possible to match the historical control group to the test group in observed factors but there is no assurance for any unobserved factors. “The lack of randomization and blinding, and the resultant problems with lack of assurance of comparability of test group and control group, make the possibility of substantial bias inherent in this design and impossible to quantitate.”
Because of the serious concern about the inability to control bias, the use of the external control design is restricted only to unusual circumstances.
Moreover, the historical control group was identified post-hoc in this NDA, leading to potential selection bias that cannot be quantified. If a historical control is to be utilized, selection of the control group and matching on selection criteria should be prospectively planned without knowing the outcome of the drug group and control group.
Based on ICH E10, “a consequence of the recognized inability to control bias is that the potential persuasiveness of findings from externally controlled trials depends on obtaining much more extreme levels of statistical significance and much larger estimated differences between treatments than would be considered necessary in concurrently controlled trials.” The success criteria for this historical control study were not discussed or pre-specified in the protocol.
Given all these concerns, including issues of comparability of eteplirsen-treated patients and historical control cohort patients, the fact that 6MWT is not a “hard” efficacy endpoint, the potential of selection bias due to the post-hoc identification of the control cohort by the applicant, and all the known pitfalls with the use of historical controls, the comparison of the eteplirsen with historical control is not statistically interpretable.


However, even though the statistical review on the use of historical control was very negative, the eteplirsen was still approved as the first drug treating the DMD and presumably the results from the comparison to historical control played the pivotal role in decision.

In general, the use of historical control can be accepted in some situations especially in rare disease area where there is no approved drug available. Whenever the historical control is used, the following factors need to be considered:

As I was recently preparing a poster for ATS Internal Conference, I was told that the plots I provided were not in high quality. When placing the plots on the poster, they became blurry. I realized that the issue was with the DPI.

DPI is used to describe the resolution number of dots per inch in a digital print and the printing resolution of a hard copy print dot gain. High DPI = High Resolution.

The journal may have a requirement for the minimum resolution for the graphs and figures, for example, the PLOT One requires the resolution in the range of DPI 300-600. The Science magazine has the following requirement:

Wiley had a paper discussing the challenges the authors might face for providing the high resolution figures. See the editorial: How to meet dots per inch requirements for images

I used SAS procedure sgplot to create the plots. The default DPI is 100, which is too low for publication or poster. Fortunately, there are easy ways to change the DPI for the output plots. Below are some programs for doing so: 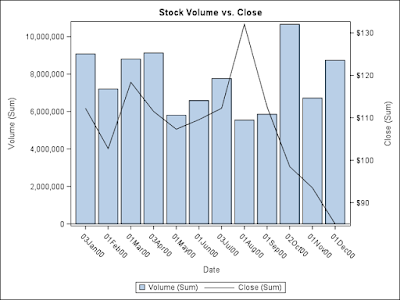 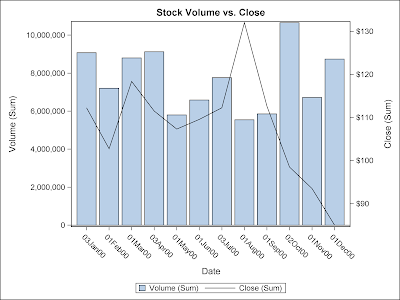 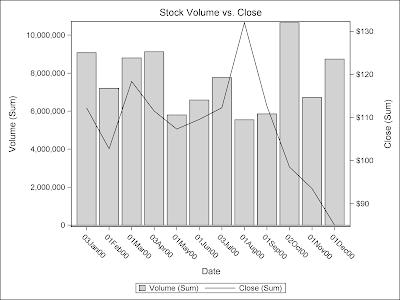 When high DPI is chosen, the size of the file will increase. For the same plot, the file sizes for three plots (in png format) above are 26, 160, and 158 kb.

The following program will service the same purpose, but use ods pdf commend.

The same issue with graph quality is also true when we use R. There is a RES = option to select the desired DPI. Please see the blog post by Daniel Hocking "High Resolution Figures in R".