Excel spreadsheet to calculate the p-value for Fisher Exact test

A colleague of mine wants to have a small program to calculate the p-values during the course of the study for a randomized, open label study. For those who don't want to use any statistical software such as SAS, an excel spreadsheet can serve the purpose.

However, this is not a good practice and should be discouraged or prehibited. Even though this is a randomized, open label study, the study team should be restrained from continuously performing the testing based on the cumulative data.

Age Group in Pediatric, Perinatal or Preterm, and Geriatric Subjects

In a previous blog article, I discussed the “Pediatric use and geriatric use of drug and biological products”:

Recently, I run into several studies where the age group needs to be further split.

Pediatric population can be further divided into 2-5 years old, 6-11 years old, and 12-16 years old.
This grouping of the pediatric population was used in a pharmacokinetic study in primary immunodeficiency patients in child. Per FDA’s request, the pediatric patients are further divided into groups 2-5, 6-11, and 12-16 years old. FDA asked that the study should contain subjects in each of the sub-groups so that the assessment can be made to see if the pharmacokinetics are consistent across different pediatric sub-groups (or at least there should be no obvious difference among these sub-groups).

“An Open-label, Single-sequence, Crossover Study to Evaluate the Pharmacokinetics, Safety and Tolerability of Subcutaneous GAMUNEX®-C in Pediatric Subjects With Primary Immunodeficiency”

The age definition in perinatal period is much trickier. In a policy statement by Committee on Fetus and Newborn “Age Terminology Duringthe Perinatal Period”, various definitions of age are described:
In clinical trials with pre-term babies, the study endpoints are usually defined based on the post-menstrual age (PMA). For example, in an article by Bassler et al “Early inhaled budesonide for the prevention ofbronchopulmonary dysplasia”, the primary outcome was a composite of death

or bronchopulmonary dysplasia at 36 weeks of postmenstrual age. While the study treatment will not be given until after the birth, 36 weeks of postmenstrual age is counted from the first day of the last menstrual period. For different babies, the chronological age or observation period (when the death or BPD event is observed) will be different depending on the actual gestational age.

It can be illustrated in the following diagram. 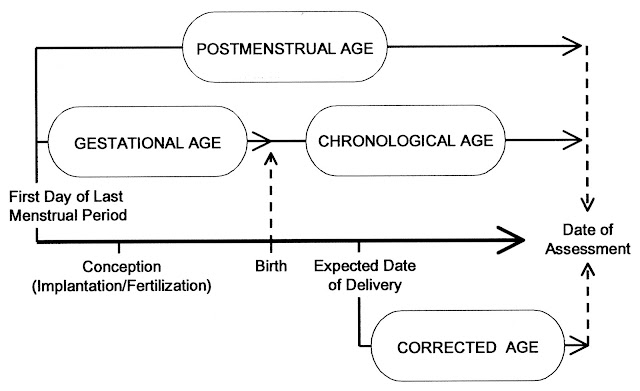 Where N is the sample size needed, C is the confidence interval, and R is the reliability.

With typical 95% confidence interval to achieve 95% reliability, a sample size of 57 will be needed.

The website below contains the explanation how the success run theorem formula is derived. With C = 1 – R^(n+1), we would have N = [ln(1-C)/ln(R)] – 1, slightly different from the formula above.

How do you derive the Success-Run Theorem from the traditional form of Bayes Theorem?

This derivation above is based on uniform prior for reliability (a conservative assumption) which assumes no information from predicate devices and the same weight to every reliability value to fall anywhere between 0 to 1.

We have seen this application in the field of automotive electronics attribute testing, but have not seen any application in FDA regulatory medical device testing.