How to interpret odds ratios that are smaller than 1?

Here is a question posted on the web about the interpretation of odds ratios that are less than 1.

If we have to say the odds for a Non-White person, we may say "Non Whites have odds .322 times as great as those of Whites".
In an article "When can odds ratio misled?", Davies et al stated:

Another webblog described the issue in interpreting the odds ratio that is less than one.

In practice, when dealing with the odds ratio less than 1, when possible, I almost always try to reverse the column or recode the response variable to get the odds ratio larger than 1 before I do an interpretation. It is easier for people (especially non-statisticians) to understand the odds ratio with the value greater than 1.
In an example below, the treatment group is actually less effective in terms of the response.

From the SAS outputs, we get the odds ratio of 0.372, which indicates that the treatment group has odds 0.372 times lower compared to the non-treatmetn group in terms of the success. The interpretation is somewhat difficult to understand.

For bioequivalence studies, it is often for us to show the average bioequivalence by declaring the bioequivalence if the 90% confidence interval of the geometric least squares mean ratio is within 80-125%. The associated study design is typically 2x2x2 cross over design with reasonable sample size (for example, 12 subjects, 24 subjects,…) if the within subject variable is not so big. This approach has been outlined in several FDA’s guidelines:

Recently, there are a lot of discussions about the bioequivalence studies for a product with high variability (high variable drugs). Highly Variable Drugs refer to the type of drugs with higher within subject variability and  is Defined as one for which the root mean square error (RMSE) from the ANOVA bioequivalence analysis > 0.3 for either AUC or Cmax.

For highly variable drugs, if we employ the common study design, the required sample size will be very large, which will cause the ethic concerns to implement such studies.

FDA had several advisory committee meeting in discussing this issue. The most recent meetings were in 2004 and 2009. In 2009 meeting, the slide presentation  by Dr Conner from FDA summarized the development in dealing with this issue and FDA’s position (see slide presentation “Bioequivalence Methods for Highly Variable Drugs and Drug Products”).

Among various approaches to address the bioequivalence issue for highly variable drugs, reference-scaled average BE approach has been suggested. This approach requires less subjects in the study, but with replicated treatment design such as three-period, reference- replicated, crossover design with sequences of TRR, RTR, & RRT or four-period design with sequences of TRTR and RTRT. The replicated crossover designs were also discussed in FDA guidance “Statistical Approaches to Establish Bioequivalance”, but was for dealing with the carryover effects. Here, the replicated crossover designs are for dealing with highly variable drugs.

The implementation of the reference-scaled average BE approaches have been detailed and discussed in FDA guidance (draft) many publications. The most relevant ones are:
-         FDA Guidance on Progesterone (2011)
-         Sample Sizes for Designing Bioequivalence Studies for Highly Variable Drugs by Endrenyi and Tothfalusi (2012)
-         Bioequivalence of Highly Variable Drugs: A Comparison of the Newly Proposed Regulatory Approaches by FDA and EMA by Karalis et al (2011)

The European Medicines Agency also recognizes certain drugs as highly variable drug products (HVDP) and  is willing to accept a wider difference (i.e., a wider 90% confidence interval) in Cmax for bioequivalence evaluation. In its guidance "Guideline on the Investigation of Bioequivalence", section 4.1.10 specifically discussed the HVDP: 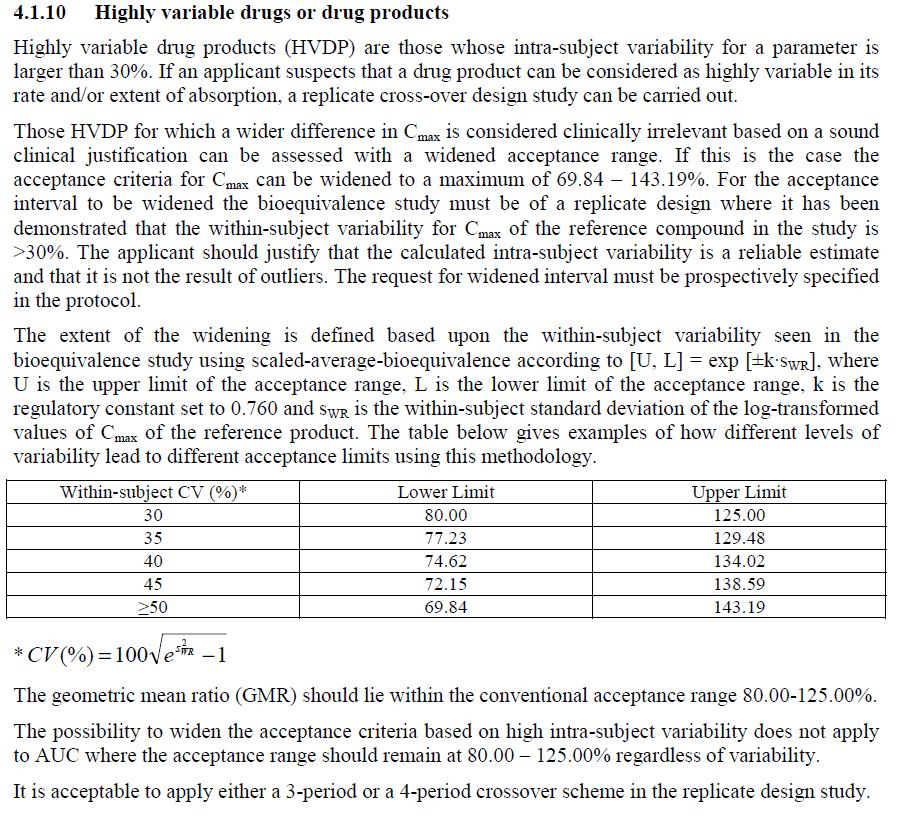